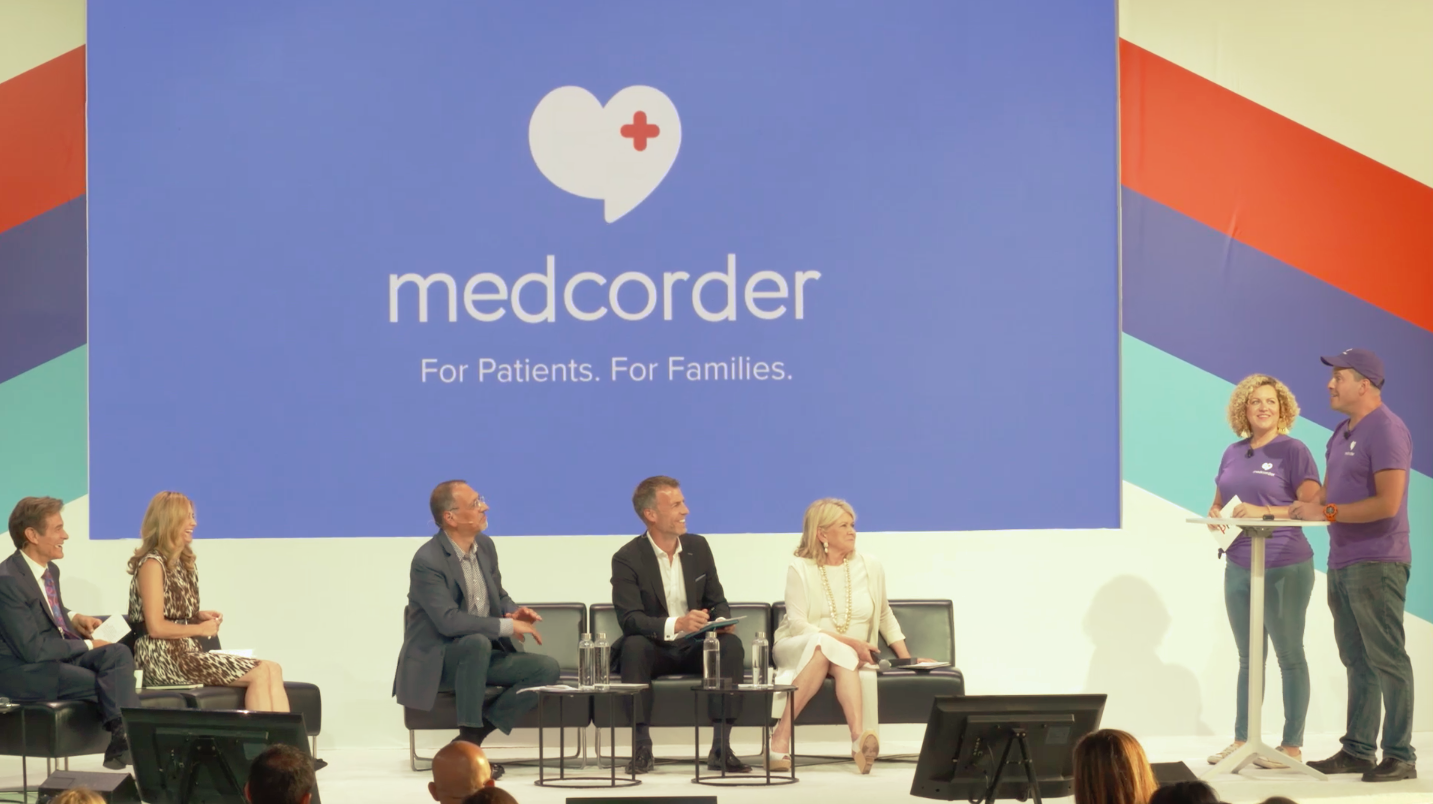 Disruption Garage: Medcorder, Where Are They Now?

Medcorder was an audience favorite at HealthFront 2019’s startup competition. One year later, we checked in with its founder, to see how things have progressed.

Medcorder lets patients record physician consultations, transcribes those conversations and sends the transcripts to a list of family and friends. The app promises to aid in patient comprehension, adherence and ultimately, patient outcomes. It was voted the audience favorite at HealthFront 2019’s Disruption Garage, a “Shark Tank” like competition that featured four medical technology startups vying for a package of services to help bring innovative products to market.

Flash forward to 2020. A lot has happened in a year—from acting on input from the judges to COVID-19—and Publicis Health Media’s Chief Investment Officer Colan McGeehan caught up with Medcorder founder and CEO David Weekly for an update.

(This conversation has been edited for clarity)

Colan McGeehan: At the time of the Disruption Garage, Medcorder was still a work in progress. I’m curious to see how things have progressed in the last year. Fill us in!

David Weekly: The app is a lot more polished and we’re being used by a lot more people. From a partnership perspective, we have a number of clinical trials in flight now to demonstrate the importance and efficacy of having a recording, and how that impacts the patient’s perception of the quality of care they’re receiving. Ultimately, we’d like to demonstrate better outcomes for patients. Because when a patient has access to a recording, they’re better able to understand and comply. We know they can get better outcomes.

CM: For me personally, this idea of being able to have access to this information, even if I couldn’t be there, was really compelling given some of the family health issues I deal with and that my parents and extended family are living far away. Given the current climate, I’m curious how people and clinics are using Medcorder differently than you thought a year ago.

DW: It’s been an incredible year! In January and February, we saw our usage explode. Our user base more than doubled in the first two months of the year and overall usage tripled. So, things were looking to be a really explosive year for us. Then COVID hit and a couple things really became true.

On the positive side, is the adoption aspect. Most facilities don’t allow guests in, so if the classic advice is to bring someone with you, you can’t do it anymore. So, if you’re going to have to go it alone, it makes it extra important to record. Not just for your own memory, but so your loved ones can hear what the doctor had to say.

This is also true of patient advocates. We saw our partnership with UCSF [Health] change. We went from something that was being used on the side by one or two volunteers, to something more mainstream for them. None of their patient advocates could sit in the room—that was the model they’d been using for years. So, we’ve been a part of helping facilitate that change and helping with the patients, even when the advocates can’t be in the room anymore.

CM: Telehealth keeps coming up a lot. It seems like a perfect fit to bring telehealth companies and Medcorder together, because you don’t want to lose what’s being said.

DW: After this call (in mid-July), I have a second meeting with the integration team of a telehealth provider, so it’s something we’re taking very seriously. We do have a telehealth solution that works today, and that is to use a second device: If you’re using a computer or tablet, you hold your phone or second device up next to it. It’s called an analog loophole. It works with any telehealth platform, as long as you can put the device on speaker mode you can record. For better for worse, modern mobile operating systems don’t allow one device to operate and record at the same time.

In the most recent version of our client, we’ve done something no one has done before—we give patients a phone number. They can give this number to the doctor. The doctor calls the number, the patient’s phone rings, they have a regular call and at the end of the call, they get a transcript. We take care of all of that for the patient. The two conversants are broken out into their own channels and the transcript reads like a screenplay. It’s called being ‘diarized.’ That’s with the 3.3 release that came out last month.

And in the 3.4 release launching now, we include medical term linking. Terms mentioned in the transcript will be highlighted and you can tap and link to more information about that term.

CM: How has HealthFront impacted your business?

DW: It was our first major exposure in terms of being on a stage and in front of a crowd, and it was wonderful to get that exposure. Not only to present and get feedback, but to interact with and get to meet folks in the audience who are in pharma and learn about what they’re looking for in terms of interacting with patients. It was really helpful for us to get to connect with people in the healthcare industry in that way. We’re really grateful for that.

CM: Martha Stewart was one of the judges. She brought up the idea of scaling, and wondered how you do that in a crowded app marketplace and monetize it. Is this something you can address?

DW: We’re still the only solution in the marketplace that exists for discussing a physician consult with family members. It’s a high intensity, high information conversation. When a patient sits down with a physician, we know that the average rate [of speech for the doctor] is 135 words a minute. The doctor is putting a lot of information out there for the patient, who isn’t able to digest that very well. And they need their family to help digest that. We actually know that sending a patient home with a recording helps. We’re the only place that puts it all in one place. Tap to record, you get a transcript, it’s automatically shared.

There are one or two that are patient-centric recording apps, but don’t have sharing as a central capability. To a certain degree, it’s not crowded at all because nobody else does what we do.

CM: This was your first time coming on stage to present in a “Shark Tank” like program. Out of everything the judges said that day, is there anything that stuck out? And did any of it impact your business moving forward?

DW: It was all good advice, even some of the critiques. Dr. Oz was concerned that physicians would reject the technology because they were concerned about liability, and that’s proved a really interesting one for us to poke at.

On the one hand, we do see a fair number of physicians concerned about liability with recordings. But on the other hand, it represents a very interesting opportunity. If you go to the malpractice insurers themselves and talk about liability, it turns out that having an unambiguous record of what the doctor actually told the patient can be really helpful in protecting the doctor. Because it’s in the absence of the recording that you don’t really know what risks were disclosed to a patient or what the patient agreed to. This presents a really interesting opportunity to improve clarity for the whole system – for the patient, the patient’s family, the doctor and the health care system.

There are huge benefits to having clarity. When there’s a lack of clarity, bad things happen.

CM: A year from now, when HealthFront is back, what can we expect from Medcorder?

DW: At HealthFront we basically had a published prototype with users in the low thousands to tens of thousands of people using the app today. Now with the polished app experience, the next year is really going to be about turning this into a business.

The first step was, ‘can we make a prototype that validates that people have this need and will use something?’ And the answer was yes. Now, can we take that and turn it into something that people want and love, that really helps people get the most out of their consults. That’s where we are today. We have an app that I’m pretty proud of in terms of functionality. The smoothness that lets you really prep for an appointment, get the most out of the appointment and get the benefit of being able to review it, post-op.

In the next 12 months, we’ll start to be able to have clear, clinical evidence of the effect of Medcorder on care—that patients do better when they have Medcorder. We’re specifically looking at a variety of cancer conditions and doing three separate trials with myeloma, prostate cancer and blood cancer patients. We think these will demonstrate it’s easy to use, high impact and doesn’t require a doctor to change anything about how they’re delivering care. But the way the patients rate the care, their level of comprehension and level of adherence is all going to be higher. I think that will open the door to a bunch of interesting partnerships.

CM: It’s exciting to see how everything is coming along. I’m really looking forward to next year!

Connect with David and Colan on LinkedIn.